It is an upgrade of the original SD40; being part of EMD's improved/upgraded and more reliable "Dash 2" line.

Many have been built (with over 4,000 built, with an additional 1,000 or so custom variants build; including most of the original SD40 units having simply been upgraded or rebuild to "Dash 2" standards), were purchased by many railroads and are still currently in use. Though, only CSX and Norfolk Southern still primarily utilize their fleets of units for general revenue freight service. Some railroads or railways (like CSX), are currently rebuilding many of their SD40-2 unit to extend their longevity. Others (like NS), have since rebuilt similar models (like the SD50) to SD40-2 specifications. The D&RGW was one of the only active US Class 1 railroads to not purchase the SD40-2 during its production. Rather, they purchased a specialty variant that was catalogued and marketed separately: the SD40T-2.

Burlington Northern (BN), Union Pacific (UP), Canadian Pacific (CP), and Conrail (CR) had the largest fleets of SD40-2's out of all North American Class 1 railroads. Today, BNSF, CSX, NS, and the DME (a regional Class 2 railroad owned by CP) currently have the largest operating fleets of active units.

Various export models with SD40-2 specs or qualities have also been built, such as the BR Class 59 (EMD JT26CW-SS) along with the GT26CW-2 for eastern nations and territories (such as Morocco and Turkey).

The EMD SD40-2 is an upgrade of the original SD40 and is equipped with an improved modular electronic system and other internal features that surpassed the original model. It was the first entry in EMD's "Dash 2" line of upgraded and improved diesel locomotive models (which included improved wiring, improved dynamic braking systems, better tractive effort; among other enhancements), and was originally meant to compete with the MLW (ALCO) C-630/M630 and the U30C from long-term rival GE, but quickly captured overwhelming popularity and success leaving EMD's competitors behind. Despite it's initial success, the model unfortunately was one of the last commercially successful models built by EMD that was produced by the masses, which further maintained the locomotive builder's status as the leading builder, for GE unfortunately took the lead in 1987 with the debut of the C40-8 and subsequent full-production of the Dash 8 line, which spelled the end of EMD's dominance in the locomotive market.

There have been countless customized and specialized versions or variants of the model: the SD40-2F; a cowl-type unit built for the Canadian Pacific (CP), and the SD40-2W; built with a Canadian wide cab for Canadian National (CN), and many other variants as opposed to the original (as listed below).

Many have been built (3,982) and many still exist as of today, but are slowly in the process of being retired from primary service on US Class 1 railroads such as BNSF, Norfolk Southern, and Union Pacific (although CN, CP, and CSX still primarily use many of their active SD40-2 units for general revenue freight service). Ironically, NS has since purchased numerous fleets of second-hand units to utilize in yard and local service, while BNSF and UP currently use the remainder of their own units for said exact services as well, but are commonly equipped with remote control features rather than being manned by switch crews.

The DM&E/DME (Dakota, Minnesota, And Eastern) has the largest fleet of SD40-2's than any other North American Class 2 or Class 3 or regional railroad (including it's former subsidary, the Iowa, Chicago, And Eastern; ICE/IC&E).

Although the original SD40 (and subsequent SD40-2) was rated at 3,000hp, later versions/variants of the SD40-2 were (and most still currently are) rated with an additional 200hp to 300hp as a result of having the prime-mover reconfigurated, a different alternator, or having different versions or variants of traction motors, which (in some cases) also provided additional tractive effort furthermore increasing the amount of horsepower output. Though, most of these units (being CP's fleets of SD40-2F units as well as CN's SD40-2W units and so forth) were built at EMD's London, Ontario facility, and include cowl bodies and/or "Canadian Cabs" as an easy distinction; though many standard-cab units were also built to said specifications.

Several SD40-2 (and subsequent models; including its predecessor) units were built without dynamic brakes. Among them were ordered from the Rock Island, Mopac, and SOO.

There are many different versions and/or variants of the SD40-2 (aside from the original, preceding SD40), as well as different classifications.

Note: "SD40-3" is also a common specification regarding existing SD40-2, SD40, or similar models upgraded to "Dash 3" specs. Such example being the SD40-2's owned and operated by Mobil Grain Ltd.

CSX SD40-2 #8888 "Crazy Eights" was a unit which was involved in the infamous runaway which occurred in Willard, Ohio in 2001. Such incident inspired the 2010 film "Unstoppable" (though ironically, AWVR #1206; the SD40-2 in the film, was portrayed as a "hero" as opposed to being a "villain" like CSX #8888). Though, it unfortunately is currently awaiting its next fate to be converted into an SD40-3 at CSX's Huntington, West Virginia shops.

During the early 1990's, the Burlington Northern (BN) experimented with the usage of Light Natural Gas or Liquefied Natural Gas (LNG) on two of their SD40-2 units. The experiment was a success, but it was deemed to be to expensive to replicate, and the units were eventually placed in storage. Several years later, they were sold-off to HLCX after the BNSF merger and were recently purchased by NS (Norfolk Southern); such as NS 3528, which surviving example of one of the units, and was one of the many SD40-2 units acquired from HLCX by NS in 2013. Ironically, the unit still retains it's distinct radiator section despite undergoing a complete overhaul.

Two CN (Canadian National) SD40-2W units were recently converted to also use liquefied natural gas, and are part of an experiment or program to conserve fuel consumption and make fuel spending more economical for the railroad and the environment (similar to what BNSF has been doing with their SD70ACe units); despite LNG fracking being more potentially harmful for the environment.

This was the very first article or page on this site.

Though most may be exactly the same externally or internally, some railroads or companies (in general for that matter) have rebuilt various units into their own unusual, yet uniquely classified types. Such as:

Allegheny and West Virginia Railroad (AVWR) #1206 (the railroad itself, is entirely fictional and was created for the film "Unstoppable"), which chased after two runaway AC4400CW's leading a train hauling toxic chemicals.

A BN (Burlington Northern; originally GN/Great Northern) SDP40 which was once owned by the BNSF until its donation to the Minnesota Transportation Museum in 2009.

CSX #4617 when it first received its number patchwork.

CSX #4617 being towed with two of the three remaining Chessie System-painted units (on CSX's roster) in 2008, just before it was repainted in 2009. 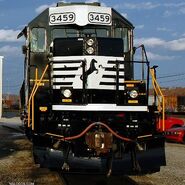 An ex-BN SD40-2 which was acquired from HLCX by NS, and serves as a new entry for its existing SD40-2 roster. A diagram example of a NS "Admiral Cab" design (notice how the window frames, hood, and number board plates are slightly different from the original short hood cab on original SD40-2 units). 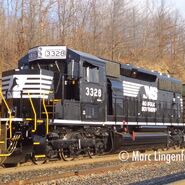 Another example of a NS "Admiral Cab" SD40-2 revealing the distinct nose or hood.

A CP SD40-2 with a "radiator shield" used for improving the air intake quality for the rear radiator section (similar to that of a "Tunnel Motor").

A grey-painted CN SD40-2 which is actually one of the many former Wisconsin Central (WC; units originally owned by the Algoma Central) SD40-2 units which were absorbed into the railroad after the WC's purchase in 2001.

A standard-hood (low-short hood) N&W SD40-2 on an SD35's frame, which was originally a "straight" or "true" SD40 upon construction.

An SD40-2 at Altoona, PA, showing how the original high-hood cab has been cut clean off for replacement by an Admiral Cab.

The electrical cabinet normally located behind the cab of an SD40-2.

A KCS SD22ECO (rebuilt with components from an SDP40).

DME (Dakota, Minnesota and Eastern Railroad) "Mount Rushmore"; the commemorative 50th anniversary (1941-1991) SD40-2, serves as a prime example of one of the many SD40-2's owned by the railroad (with the DME currently owning the largest fleet as of today, beating previous records).

An overhead view of NREX #9402 revealing its unusually long frame (which originally was meant for housing the long-hood of its original basis; being the "Tunnel Motor" of an SD40T-2).

Another view of the unit. 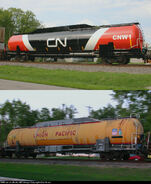 CNW 1 (tender used for the CNW, UP, and CN's LNG experiments) before and after comparison.

One of the BN's light natural gas SD40-2 units converted for the experiment.

CSX #8888 as seen in Huntington, WV awaiting conversion to becoming an SD40-3.

Two TORC (ex-CSX); TORCO, Toledo Dock, or Toledo Ore Company, SD40's retaining CSX YN2 schemes. CSX has since scrapped and/or rebuilt many of such units leased to their respective affiliate (some which have since resided at their Huntington, WV facility).

Another view of the unit before it underwent overhaul.

Another special WSOR SD40-2 dedicating the railroad's service to the state of Wisconsin. The unit was one of the only acquired from MP heritage (built as MP #3213 in August 1975).

A converted CP SD40-2 meant to run on compressed natural gas (CNG) coupled to its tender.
Add a photo to this gallery

Retrieved from "https://trains-and-locomotives.fandom.com/wiki/EMD_SD40-2?oldid=9387"
Community content is available under CC-BY-SA unless otherwise noted.