This article or page is currently unfinished.

They were then inherited or acquired through Penn Central (later Conrail), Family Lines System (following the SCL merger), and Burlington Northern after numerous mergers which occurred during the time. Upon the completion of the Oro Dam Project in California, the remaining units owned by the contracting company (minus the two which were wrecked and eventually replaced) were then sold to the L&N and lasted prior to the CSX merger in 1980.

Only one U25C has been preserved, while the remainder have since been scrapped.

Although not nearly as popular or commercially successful compared to its four-axle counter-part; the U25B, the U25C was still a powerful machine upon its debut. Regarded as the first six-axle road switcher (or road diesel) built by GE, the model began what was only a small stepping stone for today's modern motive power. 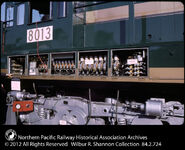 A detailed view of ODRR #8013's wiring circuitry or electronic wiring showcased during a GE exhibit sometime prior to the debut of the model.

A comparison between the U25C and its successor: the U30C.

Oro Dam U25C's leading a loaded train towards the Oroville Dam site in 1963-64.
Add a photo to this gallery

Retrieved from "https://trains-and-locomotives.fandom.com/wiki/GE_U25C?oldid=9349"
Community content is available under CC-BY-SA unless otherwise noted.